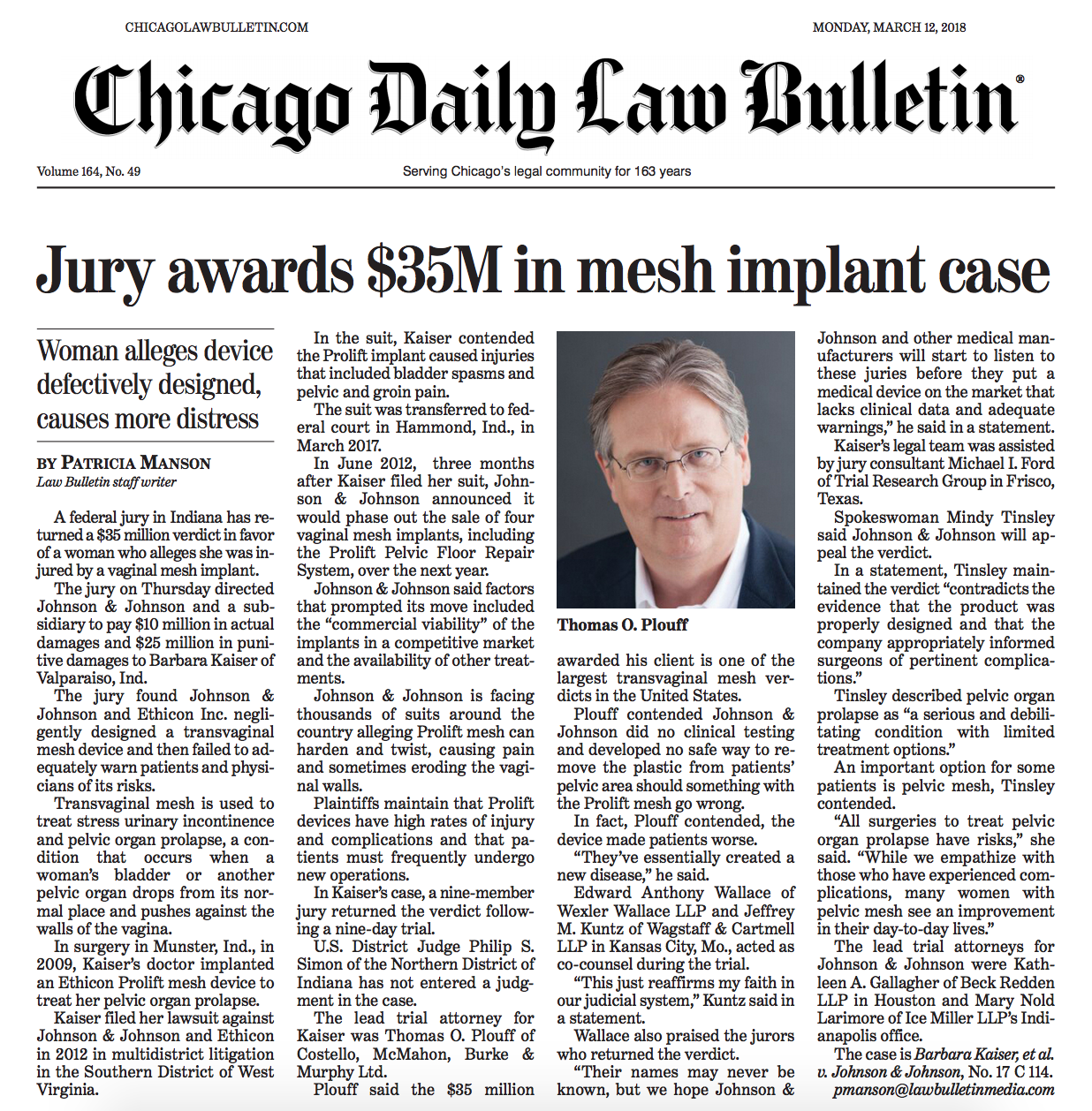 Judge Flaum asked a single question during the argument, posed to defense counsel to the effect whether accepting your argument means no state tort actions can be brought against a medical device manufacturer.  This could be viewed as a question favorable to Mrs. Kaiser, and it was answered by defense counsel saying it would preempt design defect claims, except on certain Class I and II medical devices, but would not preempt failure – to – warn claims.

The sole question by Judge Kanne is what was the evidence that a car crash had caused the transvaginal mesh to be crushed because she did not go to a doctor before the accident with a complaint of pelvic pain.  In answer, Mrs. Kaiser’s counsel said that Dr. Rosenzweig opined that Mrs. Kaiser’s pelvic pain complaints were due to the mesh and that the defense had not raised causation as an issue on appeal.  Given J. Kanne asked a factual question, and factual issues rarely lead to a reversal on appeal, this could be construed as a question favorable to the Plaintiff’s position.

Judge Sykes asked multiple questions about the FDA review process.  Some questions went to how the Supreme Court established that the 510(k) review process is not a safety review and that nothing kept Ethicon from submitting a safer mesh design to the FDA. Another question was why did the parties not call the implanting doctor, Dr. Bales, live at trial.  Defense counsel answered that apparently both parties thought it was in their best interest to do so.  It is also a matter of record that the testimony given by Dr. Bales survived a directed verdict motion at trial and that after the deposition testimony he became an expert witness for Ethicon.

Defense counsel started with a bang by saying the trial court excluding the FDA evidence was like dropping a shoulder in the battlefield without a weapon or even shoes.  But the Seventh Circuit knew of other cases where the trial judge excluded FDA evidence as a waste of time.

At the conclusion of the argument the Seventh Circuit took this transvaginal mesh case, argued in Chicago, and tried in Hammond, Indiana under advisement.

Transvaginal meshes are implants with netting which allows them to be inserted into the vaginal area. They are available in different forms, such as in the shape of slings, hammocks, tape, and ribbons. They function by giving support to weakened pelvic organs and healing damaged tissues.

They are inserted into patients via surgery, and have been in use since the 1990s, when Boston Scientific released the first vaginal mesh, ProtoGen, into the American markets.

Although transvaginal meshes specifically are meant for women, other forms of mesh-based implants are designed for both men and women.

You may use a transvaginal mesh if…

Transvaginal meshes are used by those who have stress urinary incontinence (SUI). This is a fairly common condition in which a woman’s bladder leaks urine while she is doing impact exercises—jumping up and down, for example—or while she is coughing.

The mesh is also used to treat pelvic organ prolapse (POP). This refers to the movement of pelvic organs (bladder, rectum, uterus) within the pelvic area, which move out of their normal locations. The dislocation of organs can cause intense pain to occur when the patient is in the bathroom or engaging in sexual intercourse. It also generates numbness in the pelvic area, which can make urination difficult.

Prolapse is caused by damage to the tissues and muscles in the pelvic-floor area. Prolapse is especially common in women who have given birth, since childbirth often damages these muscles. Heavy lifting is also a cause, as are the hormonal changes wrought on by menopause. These changes can cause muscles to lose their natural elasticity.

Thousands of cases of medical issues caused by transvaginal meshes in Chicago, IL

While the meshes appeared to be successful, this success wasn’t substantiated. There is no concrete evidence showing that mesh repair is more effective when it’s performed in a trans-vaginal fashion, or that it provides any additional benefits,

Also, they were seriously under-tested. For example, data on long-term usage was simply not available. Moreover, thousands of women continued to suffer from complications, even after the mesh was removed. And in many cases, women were simply not able to remove them, even after multiple surgeries; they had to go under the knife several times simply to have the mesh removed. For other women, they experienced their mesh erode, by as much as 10%, within 12 months of the surgery.

Despite the many medical issues it caused, doctors continued prescribing them to their patients, and have continued to do so to this day. Even the FDA couldn’t solve the problem. It attempted to deal with the issue in 2008, at which point it released a Public Health Notification telling the public about the issues associated with the implant. They mentioned infection, bleeding, returning prolapse and incontinence, and erosion as being some of these issues, and stated that more than 1000 reports had been filed from 2005 to 2007. They even said that using transvaginal meshes was an ““area of continuing serious concern.”

The FDA updated the alert in July 2011; it explained that “serious complications” resulting from the use of the meshes are not rare. They also pointed out that using the meshes doesn’t make resolving the underlying medical issues any more likely, and stated their intention to investigate the use of the meshes.

Another attempt was made by the FDA in 2012, when it ordered 33 manufacturers to test their products properly and report resultant complications. However, this measure has not solved the problem, and patients are still suffering the consequences of having used the products.

As such, it’s no surprise that the meshes and their manufacturers have come under fire for causing medical issues in North America and the UK. Plaintiffs are alleging that the companies making the meshes did not provide them with adequate warnings about the product. They state that the companies even lied about the safety of their products in an attempt to garner more sales.

More specifically, they argue that mesh implants have caused them a number of medical issues, including pain and suffering and dyspareunia (in which someone experiences pain when engaging in sexual activity). In their lawsuits, they explain that these issues have caused them additional medical expenses, as well as lower quality of life, loss of wages (as the pain makes it difficult to work), and loss of consortium (that is, loss of marital relations).

In the US, patients have up to 10 years to file a claim, where 10 years begins at the time they become aware of their conditions. So, if you or someone close to you has suffered any medical conditions as a result of using meshes from these or other brands in the past 10 years, then you may be entitled to compensation. Symptoms resulting from using the mesh include pelvic, abdominal and lower back pain; pain during sxual activity; spotting; absences; tissue that has developed a granulated texture; bowel problems; problems with urination; a burning sensation during urination; scarring in the vaginal area; bleeding in the area where the mesh was inserted; and direct problems with the mesh, including exposure, migration, shrinkage, or contraction.

You may also be entitled to a class-action lawsuit if you have undertaken medical procedures to deal with these problems. Procedures include drainage of hematomas, blood transfusions, repeated removal surgeries, and IV therapy.

Transvaginal mesh lawsuits have been quite successful so far. For example, in Hammons v. Ethicon, it was determined that 12.5 million in damages, including 7 million for punitive damages, would be awarded to the victims. If you choose to pursue the company that made your mesh, you stand a good chance of being awarded damages in a class-action lawsuit. Class-action lawsuits have an excellent chance of succeeding with regard to faulty medical products and devices. With regard to the meshes in particular, juries regularly vote in favor of victims, and consequently plaintiffs are given compensation for the pain and suffering they endured. In Canada, for example, Bard Canada—the company that produces mesh brands Adjust, Avaulta and Align—was made to pay 2.4 million to settle the transvaginal mesh lawsuits begun by the plaintiffs.

As of late July 2017, roughly 9, 000 transvaginal mesh lawsuits from Bard are currently pending, including thousands of cases in the US. Other companies being pursued for their meshes include Boston Scientific, American Medical Systems, and Johnson & Johnson. It would appear that the problem is systemic, and is not limited to any one transvaginal mesh, brand, or even manufacturer.

Thus, it affects thousands of people in Europe and North America every day. And every day, women injured by these devices seek out legal help, advice and counsel so that they can bring themselves—and their families, personal health, and sense of well-being—back to the way they were before. Like you, they will not leave the problem to fester and stew until it becomes completely unmanageable. Like you, they will not rest until they can find a qualified lawyer to help them get the compensation for all the suffering they have endured.

Contact Tom Plouff and start working on your case today

If you’re experiencing these kinds of problems, then Tom Plouff can help you win your case. He is a lawyer specialized in cases dealing with product liability serious personal injury cases, including many cases of medical malpractice; this makes him well-suited to dealing with transvaginal mesh lawsuits. For example, he once got a verdict worth 4.4 million dollars for an electrician who was severely injured when a steel beam crushed his foot. He has even obtained an 11.1-million verdict in a case of medical malpractice, in which a doctor was not able to diagnose a case of bacterial meningitis.

He has been practicing personal injury law for a long time now, and helping his clients—helping them get the success they truly deserve after having suffered at the hands of negligent companies and individuals—is his passion in life. An Indiana native, he works in Chicago at his own law firm, Plouff Law. Here, he uses his profound knowledge of American legislation and jurisprudence (case law) to help his clients to the best of his ability.

With twenty-five years of experience in law, including time spent working forth U.S. Attorney, Tom is the right lawyer for your case. He currently deals with lawsuits regarding the FELA railroads, wrongful death, product liability, grand negligence, and medical malpractice. In doing so, he has made communities safer and more secure for people just like you. He belongs to the state bars of Illinois, where he works (he lives in Chicago), as well as those of Alabama and Indiana.

You can contact Tom now so that he can start looking at your case. He is committed to helping you and your family so that you can get the compensation you rightfully deserve. Simply call him at (205) 907-8570, and he will be ready to discuss your case with you at no cost to you.