When You Should Seek Damages for Birth-Related Injuries 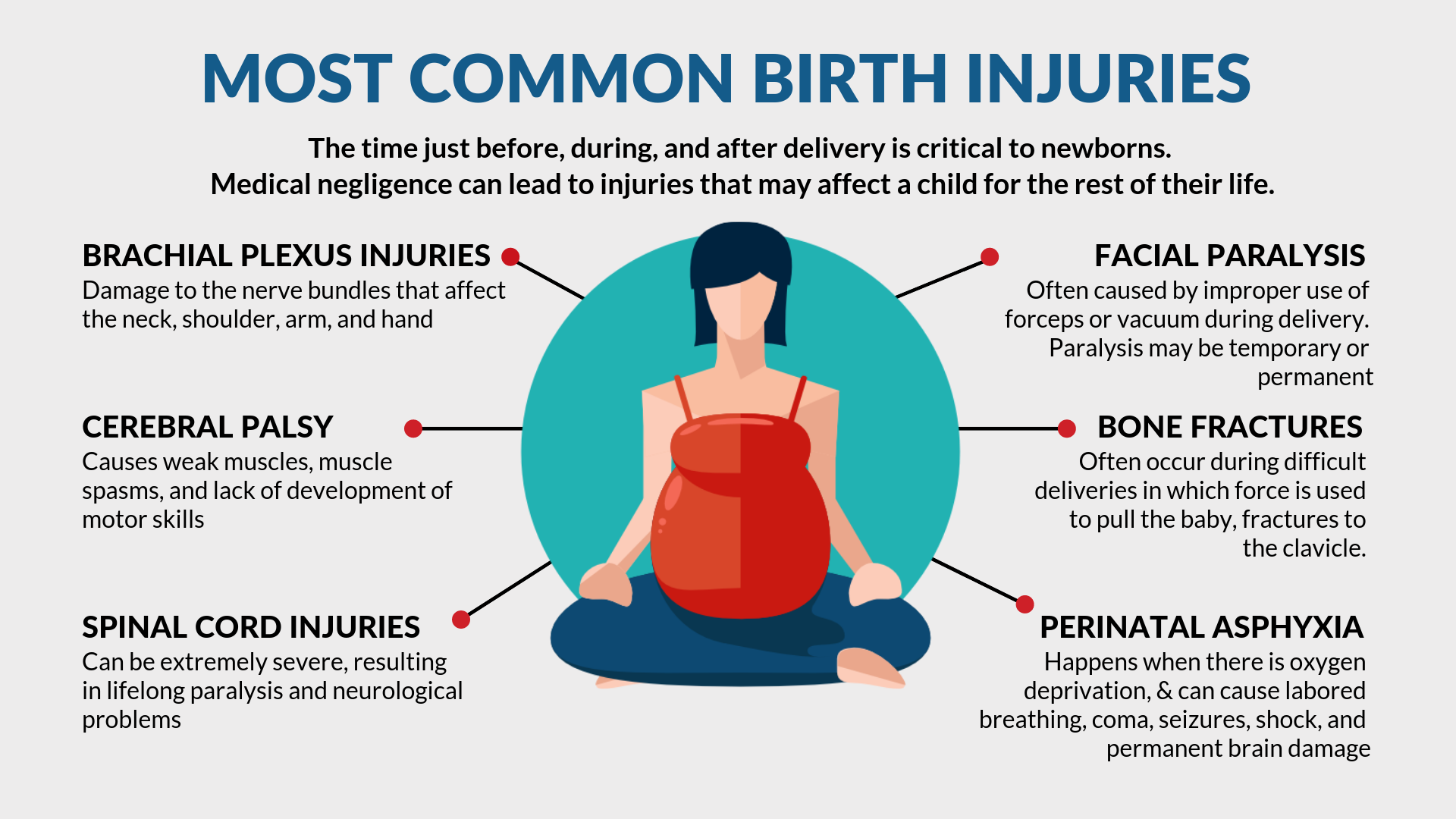 There is a reason they call it the miracle of life; there’s simply something magical about bringing a living, breathing human into this world. Things don’t always go to plan, however. Giving birth is a very medically involved procedure where a team of professionals is on hand to make sure that the baby is brought into the world, ideally, as healthy as possible. Sometimes, by chance, some severe birth defects happen. A birth defect is an issue relating to problems outside of the healthcare system’s control, whereas a birth injury is related directly to how the birthing process was conducted.

What Is Considered A Birth Injury?

If you plan on seeking a birth injury lawsuit, it is first important to have as much data as possible that solidifies that a birth injury took place as opposed to a simple birth defect that was unavoidable. First, you should immediately get your child on the road to recovery long before you create your case, while it might seem foolhardy to begin treatment until a decision has been made, early care is pivotal in your child having as normal a life as possible.

Some common birth-related injuries are:

For there to be a birth injury lawsuit, some criteria must be met:

A medical staff has a duty to their patients to provide them with the highest level of care possible, but only the staff directly charged with the welfare of you & your child during birth are culpable for what occurred. You must establish who was present & involved in your care. This is often the easiest portion to prove as even the doctors & nurses won’t argue that they were charged with taking care of you.

The next important portion to prove is that this medical staff did breach their duty of care. This can range from not providing care to the situation, to overlooking hints that something was about to go awry. In simplest terms, breach of duty is when a medical error occurs that is directly related to the medical care you & your child were being provided. When exploring breach of duty, the question being answered is whether the responses from the medical team were appropriate with regards to the information they were being presented. If there was an absence of medical help typical to births similar to yours, that’s a good indicator that a breach of duty may have occurred.

Establishing that duty was breached is not enough; that breach must be directly tied to the injury sustained by the child. If a mistake occurred, but it is not related to this birth injury, there’s simply no course for compensation because that mistake did not in and of itself cause the injury you’re seeking damages for. If an injury occurred due to lack of oxygen to the baby while it was being born, you must be able to prove that the lack of oxygen was directly a result of the medical staff being in breach of duty. Sometimes, a breach of duty can be proven, but not that it caused the injury, whether it be by random chance and the baby suffered a legitimate birth defect or by an improper collection of documents relating to the birth. 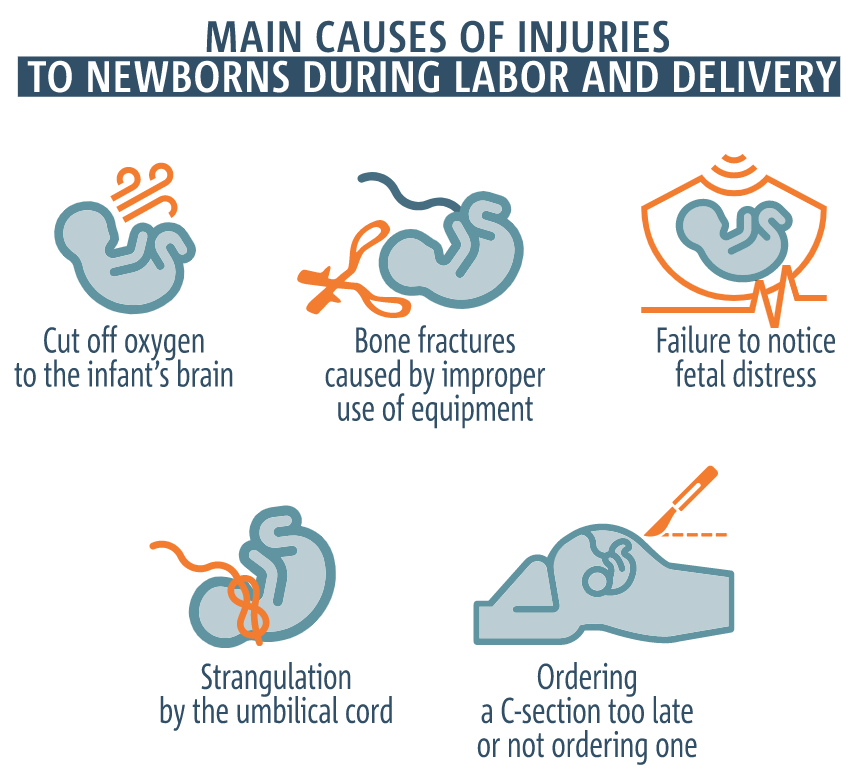 Based on the criteria above, for something to be legally considered a birth injury, the medical staff on hand must have:

To this effect, birth injuries can take about any form from physical injuries to lifelong conditions that can be traced back to what practices were followed during the birth. Palsies, fractures, and inflammation-related illnesses, can all fall under the scope of a birth-related injury. Remember, a birth injury can present much in the same way as a legitimate birth defect, so there is often no way to tell immediately, making it more important to be vigilant and diligent in all your dealings with the hospital.

How Do Birth Injuries Occur?

Now that we have discussed the legal implications, how do birth injuries happen in the real world? Recognizing when things are going down the wrong path can save you from having to seek damages in the first place by enabling you to be your own advocate during your care.

If a baby is thought to be over 11 pounds, this is considered a difficult delivery. In these cases, the doctor will often, suggest a C-section in place of a natural birth. This is because natural births involve a lot more natural forces and variables that can cause improper delivery of a baby.

The most common cause of birth-related complications is how the baby exits the birth canal. In a “perfect” delivery, the baby is born head first facing downwards (towards the mother’s back). Any other presentation is considered abnormal and risks complications. The umbilical cord plays a role in birth injuries relating to a lack of oxygen while exiting the birth canal. The baby can suffocate themselves with the umbilical cord due to improper presentation in the womb. Doctors can act quickly to remedy this situation and hopefully avoid any long-lasting damage.

The second biggest risk of birth-related injury is when improper presentation causes difficulty for the baby to leave the womb. Swelling, bone fractures, and the stretching of nerves can happen if natural birth is sought, even though the baby is not present in the typical head first, backward-facing position.

What to Do in Cook County, Chicago

For those in Cook County, it will be completely up to you to get the ball rolling for seeking compensation for damages suffered during birth. The injury should be properly assessed by a medical team to properly understand the short term and long-term implications of the injury. Also, this will get your child started in the process of recovery.

Having as much data as possible is an absolute necessity for this type of medical malpractice case. As much evidence as possible should be taken from the staff present at your birth to the medical documentation surrounding each aspect of the birth and subsequent care. Medical bills are important to have on hand and filed properly so you can seek compensation should your case be decided in your favor. Eyewitness interviews are also useful in establishing what was happening in the delivery room during the birth.

Once you have collected all the data you think you can, the next step is to find qualified medical malpractice lawyers inside Cook County Chicago, who are willing to fight your case on your behalf. You’ll be up against a hospital’s legal team and a doctor who is more than likely acquainted with the legal aspect of his/her line of work, having a lawyer who knows how to best present your case is essential at this moment in time.

The lawyer will then ensure that the three necessities relating to duty and breach thereof are satisfied. Without the establishment of duty, the breach of duty, and that said breach caused this injury, there isn’t much of a case, so a lot of effort goes into proving those three aspects of any birth injury case. Due to the high rate of births inside Cook County, there is a lot of precedent and previous cases for lawyers to draw experience from, further increasing the likelihood that you’ll have a case decided in your favor.

Once you’ve collected all your data and then presented it to a lawyer, follow their steps as closely as you can, and provide them with any extra information they deem fit. Your lawyer will work with you intimately to make sure your case is as iron-clad as possible and that you understand each step of the way.

A birth related injury can change both the lives of the child, and the parents involved irreparably, to where one parent might have to stay at home to provide full-time care for the child. Even a relatively minor injury can cause thousands of dollars of medical bills regarding extra care, so at no point should anyone ever believe that their case isn’t worth the time or that the injury is so slight it isn’t worth following up on.
Qualified lawyers are always on hand within the Cook Country area to help those who feel as if more could have been done to ensure the proper birth of their child. So, always get copies of hospital documentation and never think that your case is too big or too small to be handled properly.